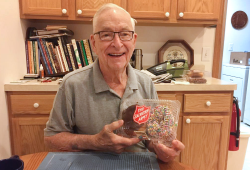 Donald Severson, 91, is a U.S. Navy and Coast Guard veteran who has devoted his entire life to being a vessel for good. Among other activities, the retired electrician spent 62 years serving with the Freemasons, and 42 years volunteering with the Coast Guard Auxiliary. To this day, he still plays percussion in his church's band.

"I like to stay busy – maybe too busy," quipped Donald, a widower, father of three, and lifelong Minnesotan. "I like doing good things to help people."

Another way Donald spreads goodness is by giving to The Salvation Army. He's been donating for as long as he can remember, as a way to thank the organization that served him more than 70 years ago.

"That place felt like home," Donald recalled. "The (officers) who operated the club were like a mother and father to me. I've been supporting The Salvation Army ever since."

Donald looks forward to many more years of doing good for people. He does not believe his age will ever slow him down.

Donald has established a Planned Gift by including The Salvation Army in his will.