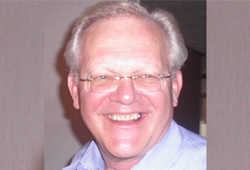 Harold "Hal" Fotsch is a retired attorney who spent more than 40 years working as an estate planner. His favorite part of the job was helping people create planned gifts for their charities of choice.

"I always told my clients, 'Why give to the government when you can give to charity?'" quipped Hal, who moved to Minnesota in 1964 after graduating from law school at the University of Iowa.

When it comes to his own estate plan, Hal walks the walk. He has earmarked planned gifts for several charities, including The Salvation Army.

"I believe strongly in supporting The Salvation Army because they do a great job serving people in need," Hal said.

"I was impressed that The Salvation Army was founded on Christian principles," Hal recalled. "They were doing a great job helping people in the inner city. They were serving people, and at the same time, they were helping people find God and turn their lives around."

Hal has been supporting The Salvation Army ever since, and he encourages others to do the same.

"The Salvation Army is a great organization," Hal said. "They fill a lot of needs for a whole lot of people."

Hal established a Planned Gift by including The Salvation Army as a beneficiary of his IRA account.